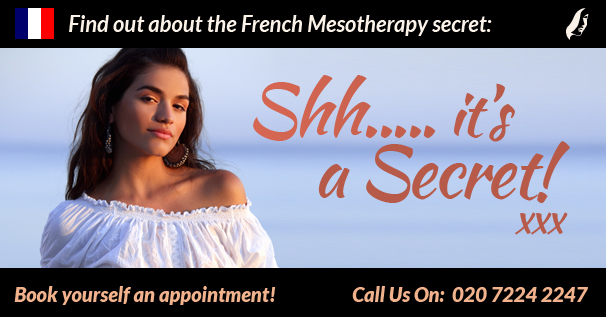 French women are constantly held up as an ideal of natural, effortless beauty, maintaining a size eight figure despite gorging on croissants and baguettes. But, don’t be fooled; it’s not that they don’t have to work at their appearance, but rather that they like to keep their aesthetic endeavours a closely guarded secret. And the top French beauty secret? Mesotherapy.

Invented in 1952 by French doctor Michel Pistor, mesotherapy is the injection of a cocktail of valuable ingredients, such as vitamins, minerals and anti-oxidants, into the mesoderm, which is the layer of fat and connective tissue in the dermis. In 1987 the French Academy of Medicine recognised mesotherapy for its benefits in treating various conditions and concerns.

It’s thought that over 15,000 practitioners in France offer this treatment and it’s on the curriculum of French medical schools, but now the secret is out. Mesotherapy as an aesthetic treatment is becoming increasingly popular worldwide.

What can mesotherapy do?

Mesotherapy has been indicated as beneficial in treating a wide range of health concerns and more serious medical conditions, including relieving migraines, tendonitis and arthritis. However, it’s mesotherapy’s aesthetic benefits that has got French women so excited.

Mesotherapy works by stimulating the production of collagen and elastin, fighting free radicals and boosting cell turnover. As a result, it improves the appearance of fine lines, skin texture and tone and bestows a youthful ‘glow’ that’s difficult to achieve with other aesthetic treatments.

One of its most exciting indications is the treatment of cellulite. The dreaded orange peel effect is thought to affect up to 98 per cent of women worldwide and the many creams and gels that are available don’t make a significant difference, despite their claims to the contrary. This is because they are unable to permeate far enough into the dermis, whereas mesotherapy is delivered directly into the mesoderm layer, improving lymphatic flow and breaking up the fat pockets that cause the skin’s bumpy texture.

How is mesotherapy delivered?

Mesotherapy is delivered into the dermis, in tiny micro-injections using a very fine needle – the treated area may be a bit red post treatment but there will be no scarring to the skin afterwards. The procedure takes approximately 30 minutes and patients find it quite comfortable.

As a leading London aesthetic clinic, we also offer the full range of non-surgical procedures, including Botox, dermal fillers and laser treatments. The great thing about mesotherapy is that it can be combined with these other treatments for an all-over skin rejuvenation. Call 020 7224 2247 to find out more about mesotherapy.