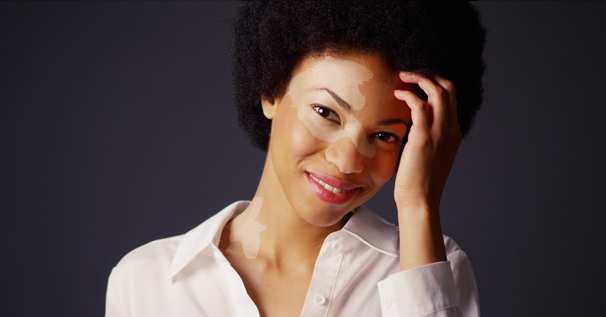 Vitiligo is a long-term skin condition that is often progressive. In the UK about one in a 100 people will develop vitiligo and it affects men and women equally. So far there has been no cure developed that can reverse the loss of pigment in the skin that is the hallmark of vitiligo, so therapy is currently aimed at improving the appearance of the skin.

At the recent annual meeting of the Pacific Dermatologic Association the newest developments in treating vitiligo were assessed.

Scientists at University of British Columbia are currently leading a phase II trial into the effectiveness of UVA1 ultraviolet light to stimulate repigmentation. Dr Sancy Leachman, professor and chair of dermatology at Oregon Health & Science University told the meeting that she thought this could be an effective treatment.

A Cochrane Review of vitiligo treatments published last year listed a study that found that ginkgo biloba, taken orally ten minutes before a meal, was more than twice as likely to halt spread of vitiligo than a placebo.

A pilot study is enrolling vitiligo patients to assess efficacy and safety of Photocil. When this topical solution is activated by sunlight, it degrades into narrow-band UVB light, avoiding the need to attend regular sessions at a clinic that provides phototherapy.

Afamelanotide is an analogue of a hormone that is known to stimulate melanocytes in the dermis. Studies published last year found that it produced faster repigmentation when combined with UVB phototherapy.

Transferring healthy pigment-producing skin tissue from elsewhere and grafting to the areas affected by vitiligo is an effective and proven treatment. New devices that aim to harvest the skin tissue without damaging the donor site are being developed.

A proven treatment for vitiligo is Melanocyte Transplantation. Developed by leading vitiligo expert Dr Mulekar, the treatment restores pigments by transplanting healthy cells. The cells are removed from the donor site and the healthy melanocytes are separated and then added to a solution which can be sprayed onto the affected area. Over time a process of repigmentation occurs.

Dr Mulekar will be attending Wimpole Aesthetics Clinic between 7 – 10 March. To arrange a consultation with Dr Mulekar call 020 7224 2247.